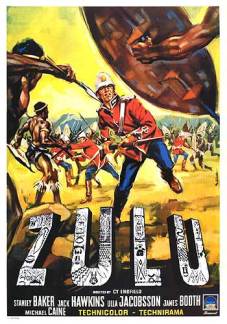 Whew!  Looks like I got lucky on the draw. (Z-5)  Thankfully I got to watch this war movie instead of another dreadful rocom.  I think I have heard of this movie before now, probably because it was Michael Caine’s first starring role.  I was intrigued just from reading the title, so I immediately hit play.

What followed was an action-packed “300”-style depiction of a real piece of history.  Some inaccuracies aside, the film was very well made, and you could really feel the production value that went into it. I would definitely put it up next to any other presentation of wars that were fought in the same era.

The story is set at Rouke’s Drift, a small military outpost on the border of South Africa and Zululand.  The plot is based in part on actual reports of the battle, which took place during the Anglo-Zulu War in 1879.  While the filmmakers take some liberty with how some of the characters act and how some of the events played out, the film is mostly historically accurate.

All of the actors in the principle roles do very well to display the varying points of view throughout the battle.  This is most evident in Stanley Baker’s Lt. Chard and Caine’s Lt. Bromhead.  Both of them possessed very different ideas about how the battle should be fought, and even if it should be fought at all.  Special props to Nigel Green as Colour-Sergeant Bourne for being so awesome.

Okay for the time.  Sometimes it got a little confusing, and I felt that more than a few rules of the camera were broken.  Still, it was a good idea to film it on-location, as the sweeping vista shots were amazing.

The gunfire and other effects never sounded fake, although the hand-to-hand sequences were a little funny-looking sometimes.  That aside, the ranged combat parts felt very pitched, and it was possible to really get a feel for the chaos that was happening.

A well put together war movie that didn’t compromise between action sequences and character development.  It was also nice to see that the Zulus weren’t portrayed in a racist or evil light, and that some attention was payed to their tactics, language, and rituals.

You have to see this if you call yourself a Michael Caine fan, or if you like historical war movies that aren’t terrible.  Also good for intelligent manly men on a guys night.